Archaon the Everchosen is a Warriors of Chaos legendary lord introduced in Total War: Warhammer. Archaon is one of the best melee fighters in the game, and is also a decent spellcaster.

By Khorne, by Tzeentch, Nurgle and Slaanesh, let the world come crashing down!

Archaon is the Lord of the End Times, the vessel through which the Dark Gods will unite their followers and turn the whole world into a Realm of Chaos. He is an individual whom all the Chaos Gods have bestowed their gifts upon. Of all the Everchosen of Chaos who have assailed the world over the ages, Archaon is the most ruthless and powerful. At the heart of Archaon's army is his old warband, the Swords of Chaos, the most dread group of Chaos Knights ever to have blighted the world. The Everchosen often rides to war leading this cadre of veterans from atop the daemonic beast known as Dorghar, the Steed of the Apocalypse.

Time is meaningless within the Realm of Chaos. Has Archaon completed his Unholy Quests or just begun his infernal journey? It matters not to him, for he is the Everchosen, and is destined to bring the End Times to the mortal fools that eke out their pitiful lives in the south. They will all pay; the price is blood, slaughter and death!

When chosen as starting lord, as of TWW2:

Archaon has the following items:

Archaon has the following mounts:

A beast in melee and master of the Lore of Fire. Archaon's only two significant issues are that he lacks a monstrous mount (making him a smaller target, but also harder for him to escape mobs of infantry) and that as a hybrid warrior/caster he needs to get to a very high level to amass enough skill points to use his entire skill set. Generally it best to prioritize one or two trees and once those are filled out sufficiently, diversify into the neglected trees. 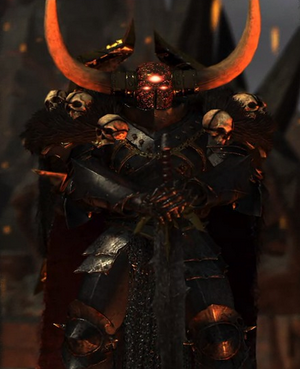 Personally, I haven't played a Chaos-based campaign in a while now, but a simple template is to work all across the Norscan region until two armies (at the minimum) are at play with one holding at least tier 3 infantry. While not the strongest at first at this point in time, Chaos Warriors can crush any other infantry during the mid-game with no problem.

When playing on difficulties higher than Hard, one should never travel to the Old World without a tier 5 hoard building and a decently leveled legendary lord (unless that individual is confident with winnings battles that should be losses for some 20 turns). When it comes to army compositions late-game, I personally build stacks of Chosen, Chaos Knights (sword-based), Hellcannons (needed against the Empire and the Dwarfs), and a few Shaggoths if I think they're needed.

Inside Archaon's army, Chosen become the strongest infantry in the game. A single Chosen unit with great weapons is able to win against most low-level lords easily due to their incredible stats. I can't understate this enough, but Chevron 9 Chosen with great weapons, and the right skills/traits for Archaon can result in over 70 melee attack, over 70 melee defense, over 140 armor, and some high 50 armor piercing weapon strength. A single Chosen unit in this state can single-handedly solo like 7 Swordsmen stacks (I haven't tried it, but it probably works).