Beastmen require Call of the Beastmen to play.

The Beastmen are a race and faction introduced in Total War: Warhammer via a DLC pack. Beastmen are playable in campaign, multiplayer and custom battles. They have 3 legendary lords.

Beastmen are mutant creatures of Chaos, part human and part beast. Primal and full of rage, they roam the forests and wilderness. The Beastmen despise civilization and seek to return to a time when humans were prey for them. Beastmen forces primarily consist of fast-moving melee infantry as well as larger monsters. They suffer from low-leadership and low armour, but are quite cheap to recruit and very hard-hitting.

A summary of Beastmen gameplay:

Beastmen are a bestial, Chaos-touched race of horned creatures who dwell in the dark forests of the Warhammer World. Most resemble a sickening blend of horned beast and man, though there are many other variations. They range through the secret beast-paths of the woods, ambushing the unwary or the isolated. Most victims of the Beastmen are killed, but those who are not suffer a far worse fate...

Beastmen first arose in the ancient past when the polar warpgates collapsed and the raw magic of Chaos first spewed into the world. It was in that time of mutation and madness when the energies of Chaos touched the world, that man became animal and animal became man. Even still, the beastmen will replenish their numbers by capturing human women, or adopting mutant babies abandoned by parents in the forest.

The Beastmen have an ancestral memory of the Time of the Beast, when primitive tribes of humans were prey and Beastmen ruled supreme. Now they look upon the walled cities of men with rage, and seek to tear down every stone, defile every shrine, and return to the true primeval chaos of the wild.

The true children of Chaos, Beastmen belong body and soul to the dark powers from their very birth. The Dark Gods have no need to woo Beastmen with divine gifts and offers of immortality, for the Beastmen instinctively serve Chaos with their bestial, violent nature.

Beastmen herds are made up of a collection of creatures, from man-sized Ungors and Gors, to troll-sized Minotaurs and monstrous Razorgors and Cygors. In Beastmen society, status is determined by size, strength and the size of one's horns. So it is that the more bestial Gors rule over the smaller, human-like Ungors. The spellcasting Bray-Shamans perform a mystic role, reading signs and omens, communing with the gods and performing black rituals and sacrifices at herdstones and other sacred sites.

Every so often, a powerful Beastlord will unite the herds, drawing them to a sacred Herdstone under the dark moon Morrslieb, and uniting them into a mighty warherd to ravage the lands of men, or even the hallowed boughs of the Wood Elves against whom they wage a secret war amongst the trees.

Beastmen forces primarily consist of fast-moving melee infantry as well as many larger monster units that cause fear and terror. This includes a monstrous infantry hero called the Gorebull. They suffer from low Leadership and low armour, but are quite cheap to recruit and very hard-hitting. Beastmen also have many units which can vanguard deploy.

Generally, a battle with Beastmen will be won or lost early on. Beastmen often rush towards the enemy, since they are weak to ranged attacks and have few ranged options themselves. Though the Cygor is a powerful monster artillery unit.

Beastmen spellcasters have access to the Lore of Beasts, Lore of Death, Lore of Shadows and their own unique Lore of the Wild. Beastmen do not rely on magic too heavily, and can take an army with no spellcasters. However it can still be a powerful strategy for them, as they have access to many summons and direct damage spells.

Most Beastmen units have the ability Primal Fury (Minotaur units have Bloodgreed and non-Beastmen units like Giants, Harpies, and Razorgors have neither) which gives melee attack, speed, and charge bonus so long as the unit's leadership is above 50%. This emphasizes the play style of aggressive and fast charges that fade away as units get weaker and lose morale. Finally, almost every unit on the roster has the Woodsman (Attribute) which allows them to pass through trees and are unhindered by that terrain type.

Beastmen have several Regiments of Renown available. These are elite, unique versions of standard Beastmen units.

Beastmen are playable in The Old World, An Eye For An Eye and Mortal Empires.

In the campaign, Beastmen are a horde faction who do not occupy settlements or control provinces. To construct buildings, their horde armies must enter into encamped (Hidden Encampment) stance. This also means they do not have any commandments.

Unlike the Warriors of Chaos, Beastmen do not suffer from horde infighting so their horde armies can be close to each other with no penalty. In campaign, each Beastmen lord will start with a main horde and also a secondary horde army led by a generic lord.

This means that Beastmen are unaffected by climate or regional occupation. 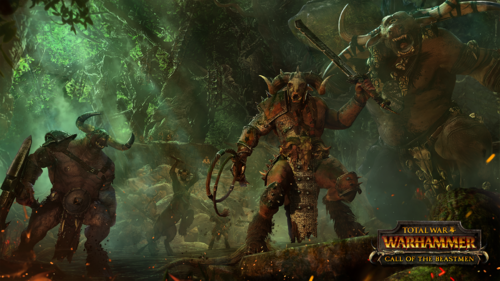 Beastmen players can choose from the following lords when starting a campaign. See the individual lord pages for information on their various bonuses and starting positions in campaign.

Money for Beastmen is called Favour, which reflects the fact that Beastmen do not seek riches but rather favour with the Chaos Gods.

Dark Moon events which trigger for them when the Chaos Moon, Morrslieb, is in different phases.

Beastmen armies have a

Beastmen are hated by most other factions (the major exceptions are Warriors of Chaos and Norsca). They cannot engage in trade at all, and their economy is based on pillaging, sacking and razing enemy settlements.

As a horde faction, Beastmen have a rather limited selection of buildings which as noted, can only be built in encamped horde armies.

In addition to common stances, Beastmen have 3 unique stances, which is the most of any race.

Beastmen post-battle options are nonexistent, as they do not take captives.

In the lore, Beastmen sometimes capture human women to rape and give birth to more Beastmen, or take captives to eat later. However, this is not represented in-game.

Beastmen have these settlement options when they have captured a settlement:

Each Beastmen legendary lord has a different starting position in campaign mode. This allows for re playability – depending on which lord you choose to start with your experience may be very different.

Victory conditions for the Warriors of Chaos faction in campaign:

Beastmen represent the ultimate in stealth gameplay on the campaign map - even more so than the Skaven of Warhammer 2. Picking out potential targets, and hitting when the time is right is crucial: While powerful, the Beastmen are a Horde faction, so losing an army can be literally game-ending. Use stealth (Hidden Encampment, Beastmen Ambush) to avoid battles that cannot be won, and then take out weakened, separated or vulnerable enemies and territories. In general, the Beastmen will struggle to maintain enough money to be solvent on their own. As a result, Loot & Raze tends to be necessary to build up favour so you can run a negative economy. The Beastmen are also prone to poor replenishment, so either combine weakened soldiers, or be able to spend a couple turns in Hidden Encampment to rebuild your armies.

As mentioned, Beastmen tend to run a negative economy, though Raiding can help with that. An army full of cheap troops kept on Raiding in high-value territories will not only bring in Favour, it will also spread Chaos Corruption, cause negative Public Order to the victim and build Bestial Rage. Traits and Followers that reduce Upkeep are all but necessary to run high-value troops as well.

Once Bestial Rage exceeds 80, a Brayherd will be created. These can be a double-edged sword, as while they'll double the amount of forces you have available, they'll also give away your position when you're trying to hide. It can often be worth sending them on a suicide mission to weaken enemies rather than keep them near your own forces. Send the Brayherd towards your target, then follow one turn later. This will keep you from being discovered, and one can either fight a weakened survivor of the Brayherd, or retreat away if the opponent proves too powerful.

As noted above, Beastmen require the Call of the Beastmen DLC for Total War: Warhammer to play.

On the campaign map, many minor factions are grouped together as "Beastmen Warherds". These all have a diplomatic positive racial bias towards each other, and use units from the Beastmen unit roster.

Introduced in An Eye For An Eye campaign:[edit | edit source]

During a Chaos Invasion, the AI-controlled Warherd of Chaos faction will help the Warriors of Chaos invade.

If the player is playing as Beastmen, then he or she can choose to ally with the Warriors of Chaos and bring ruin to the world.