"Everfing I see is mine. All da uvver bits are mine too - I just ain't got there yet. When we reach da end of da whole world, we'll turn around and march back."

Black Crag is a faction introduced in Total War: Warhammer. The faction is playable in campaign, multiplayer and custom battles.

These unruly warriors dwell in the Badlands, mountains and other wild areas and love nothing more than a good fight. From time to time, they will come together in a great “Waaagh!” - an invasion of civilised lands. Armies of Black Crag feature masses of poorly-disciplined infantry, alongside boar-riding cavalry and monsters like trolls and giant spiders.

They have 2 legendary lords, Grimgor Ironhide and Azhag the Slaughterer.

In the Potion of Speed Update for Total War: Warhammer II the faction received a name change. Previously, they had the generic name "Greenskins", sharing the name of their race.

A summary of Black Crag gameplay:

Black Crag has a diverse unit roster which is not really lacking in any one area. There are many kinds of fairly cheap or expendable infantry, ranged and melee cavalry, heavy infantry such as Black Orcs, warbeasts, chariots, artillery (eg: the Doom Diver) and monstrous units such as Trolls, Arachnarok Spiders, Giants. Their sole flying unit is the Wyvern, available as a mount. 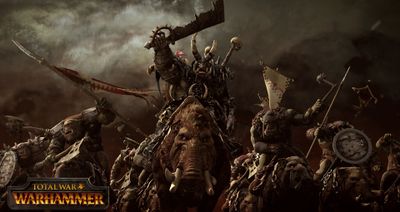 Black Crag is a normal, non-horde faction who control settlements and provinces.

The Underway is a network of caverns and tunnels that run under much of the world. Greenskin armies can enter the Use Underway stance to travel underground, avoiding danger. However this carries a chance of being intercepted. Many battle maps take place underground in the underway, see underway for a full list.

Also shared by the other factions.

Black Crag has a fairly small tech tree, not being great inventors themselves. Their most powerful units are locked behind techs at the end of the tech tree.