"What is a knight without his steed? But what is the steed without his knight? Knight and steed, noble and peasant; on such relationship is Bretonnia built."

Bretonnia is the largest and most powerful nation of men in the Old World, after The Empire. They are less technologically advanced than their neighbours, but are sheltered and protected by their geography. Bretonnian society has a strict division between the nobles and knights, and the lowly peasants who often live in squalor. The race is strongly based on arthurian legends and medieval France. Their armies consist of more numerous, cheaper peasant units fighting alongside a variety of powerful knights.

Bretonnia is the second largest nation of men after the Empire. It is a feudal society protected by hosts of knights, considered by many to be the most powerful heavy cavalry in the Old World. Bretonnia also has an underclass of oppressed peasant serfs, who are recruited as archers and spearmen-at-arms who act as a more expendable meatshield for elite knights.It is located to the west of Sigmar’s lands, separated from them by the southern and northern Grey Mountains. The nations trade via several critical mountain passes and on the whole relations remain cordial, although they have gone to war many times in their turbulent history. Bretonnia is a feudal society, split between the savagely poor majority and the rich nobles with their gallant Knights standing above the filthy rabble. In theory, the Knights of Bretonnia - the flower of its military - have a code of chivalry that forms an unbreakable duty to protect its citizens. In practice, Knights are often selfish, greedy, political creatures, more interested in procuring the shiniest armour and attending tournaments than safeguarding the basic needs of the smallfolk.

The Bretonnian unit roster is focused mostly on heavy cavalry, and this is where their killing power comes from. However it would be a mistake to ignore Peasant Bowmen or Spearmen-at-Arms who provide an important shield for valuable units of Knights of the Realm and Grail Knights. Bretonnia also has many powerful flying units such as Pegasus Knights, and even some monstrous units such as Hippogryph Knights. King Louen Leoncoeur himself has the valuable regeneration ability.

Bretonnia has several Regiments of Renown available. These are elite, unique versions of standard Bretonnia units. They were added for free in the Foundation Update. Players must sign up for / log into Total War Access, to get the regiments of renown for free. 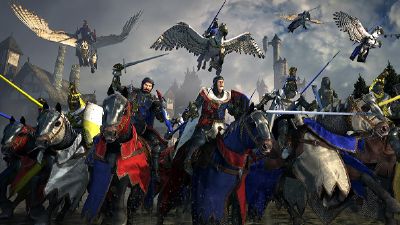 Bretonnia is a normal, non-horde race that controls settlements and provinces.

Legendary Lords for the Bretonnia faction:

Chivalry is a campaign mechanic whereby certain actions increase chivalry and provide faction-wide bonuses in tiers. If chivalry drops too low, it will incur penalties instead. Chivalry is tied to Bretonnia's victory conditions.

The Green Knight is a unique hero unit that Bretonnia can recruit in the campaign after reaching certain tiers of chivalry.

He is also available in multiplayer matchmaking and custom battles.

Under the regional occupation system of Total War: Warhammer, Bretonnia can only occupy temperate lowland provinces. They cannot occupy mountains/badlands areas which are restricted to the Greenskin Tribes and Dwarf Realms. Nor can they occupy the Norscan peninsula.

The faction of Couronne (Faction) starts in Couronne, in northern Bretonnia.

In the campaign, many minor AI factions are grouped together into the Bretonnian Kingdoms race.

Bretonnia can be downloaded for free from Steam here.

Bretonnia's regiments of renown units can be downloaded by signing up/logging into Total War Access and going to your dashboard.

The faction of Lyonesse can be downloaded for free from Stream here (add link).