Captain Drekla is a unique follower for Luthor Harkon of the Vampire Coast in campaign.

Captain Drekla was Luthor Harkon's right hand, which was somewhat ironic as he had lost his own left hand following the vampire admiral into battle. He is also the only other vampire in Harkon's fleet who had been present at the battle of Grim Moor and survived to reach the Dead and Buried. None of this mattered to Drekla, whose ironclad loyalty was inversely proportional to his wits. Where Harkon went, Drekla followed – no matter how hopeless the fight.[1] 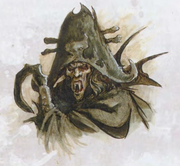