The Dark Elves are a race introduced in Total War: Warhammer II. They have five playable factions, each led by a different Legendary Lord.

The Dark Elves are a sadistic, cruel race who dwell in the cold, bleak land of Naggaroth after long ago being exiled from Ulthuan. The Dark Elf military consists of small numbers of highly-disciplined elite troops which march to war alongside hydras and other beasts. The Dark Elves sail the seas in huge Black Arks, taking slaves to boost their economy, or to sacrifice to their bloodthirsty gods.

A summary of Dark Elves gameplay:

Long ago, the near-immortal Elves were a single race. Then came a great divide: The Daemons came and Aenarion strode forth to vanquish them. At first a mighty hero… then he drew the Sword of Khaine and doomed his line. Avarice, jealousy and malevolence boiled over and forever tore apart elven civilisation. Though the Daemons were banished and the Great Vortex created, in victory came the Elves’ ultimate defeat.

A schism was rent between those who had been most loyal to Aenarion’s line, and the rest of Ulthuan. Soon Elf fought Elf and the Dark Elves, called the Druchii, were forged in war, blood and murder. This was the Sundering: a brutal civil war that nearly destroyed Ulthuan, sinking parts of the island and leaving others as wasteland.

Eventually the Dark Elves were defeated and cast out, fleeing west and establishing a new kingdom in the cold land of Naggaroth across the sea. This harsh land, as well as attacks from Beastmen and Chaos, has forged the Druchii into an a merciless and brutal race. From their dark cities, they range across the seas, taking slaves for their industry and bloody sacrifices. They will not rest until they have reconquered Ulthuan and every one of their hated kin is dead or in chains. 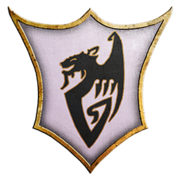 The Dark Elves have a unit roster which is decently varied. They have infantry, cavalry, strong missile troops and artillery. A few monsters and flying units are also available. Dark Elf troops have fairly good leadership and speed, and tend to be expensive, as they rely on quality over quantity.

Dark Elves are a normal, non-horde race who occupy settlements and control provinces. 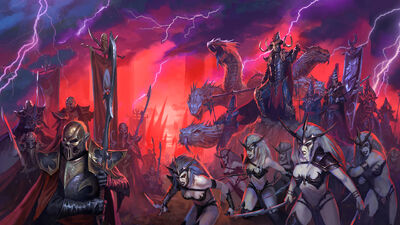 In campaign there are five playable Dark Elf factions, each with its own starting position, and led by separate Legendary Lords. See individual pages for faction-specific info and strategies

Shadowblade is a prominent character from the tabletop version of Warhammer. He is a master assassin that works for Crone Hellebron, and has appeared in every Dark Elf army book. Felicion, however, never appeared before Total War: Warhammer II.

In the Eye of the Vortex campaign, Dark Elves compete to control the Great Vortex by using Rituals.

Slaves are a unique resource for the Dark Elves in campaign that they must manage, alongside money. Slaves are captured after a victorious battle, and transferred to owned provinces. More slaves in a province provides bonuses to money income while lowering public order. Slaves can be managed from the Slaves Menu, access via a button in the lower right while viewing the campaign map. Slaves can also be sacrificed in rites (see below).

Black Arks are unique naval units for the Dark Elves which enable mobile unit recruitment at sea and provide army abilities to nearby armies in battle. They act a little like a mobile settlement, and are recruited via the Sacrifice to Mathlann.

Names of Power are titles that Dark Elven lords and the Master hero can acquire, which give those units various bonuses.

Loyalty affects whether Dark Elves lords are likely to rebel against you in campaign mode. Many things can affect loyalty, causing it to rise or fall. This mechanic is shared with the Skaven.

Dark Elves have access to 4 rites, which provide various bonuses at the cost of sacrificing slaves. The Sacrifice to Mathlann rite allows the player to recruit a Black Ark.

Chaos Corruption is spread by Morathi and her Cult of Pleasure faction in the campaign. If a player is using another Dark Elves faction and confederates with Morathi then she will stop spreading corruption. Naggarond does not spread Chaos Corruption.

The post-battle options for Dark Elves are as follows:

Settlement options for Dark Elves factions are as follows:

Dark Elves factions do not gain the shield of civilization trait during a Chaos Invasion.

How to play the Dark Elf Campaign[edit | edit source]

How to play the Dark Elf Lords & Heroes[edit | edit source]