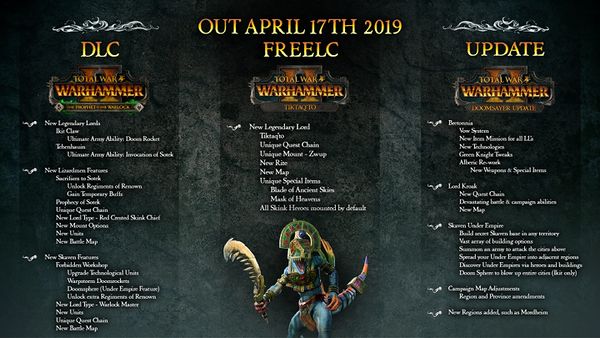 Doomsayers Update is an update for Total War: Warhammer II which was released on 17th April 2019. It followed The Festag Update.

The Doomsayers Update released alongside:

Mirrored here in case the Total War website ever goes down.

This automatic update arrives alongside The Prophet & The Warlock Lords pack, bringing a huge array of content additions, revisions, balances and improvements to the Eye of the Vortex and Mortal Empires campaigns. Ikit Claw and Tehenauin’s factions of Clan Skryre and the Cult of Sotek now appear in both campaigns under AI control, even if you do not own The Prophet & The Warlock.

Given the influx of new lords and factions over the past year, the Doomsayer Update heralds a major overhaul to campaign balance and AI behaviour, in an effort to level the playing field. The update also adds multiple new territories to both the Eye of the Vortex and Mortal Empires campaign maps. These map revisions will be active in all new campaigns you begin after the update (they won’t appear in pre-update saves).

The factions of Bretonnia also get a significant rework, addressing their buildings, techs, diplomacy, the Green Knight, and much more. And Alberic D’Bordelaux is now fully resplendent and armed with his mighty trident The Wrath of Manaan (plus a new animation-set to wield it with!).

And a quick note on modding: when The Prophet & The Warlock launches, the Assembly Kit will not be able to process Startpos files. This is something that will be fixed with a small launcher update, which we are aiming to publish next week.

If you don’t want all free content and improvements that are part of the Doomsayer Update right now, you can opt into the public beta by following the below instructions:

BRETONNIA PLAYERS: Please note that your save games may leave you with income issues due to our new Bretonnia improvements. We suggest starting a new campaign or to finish off your current campaigns using the public beta instructions above.

When conquering an enemy settlement, Skaven armies now have a new post-battle option. Alongside Loot & Occupy, Sack, and Raze, the army may now choose to Expand Under Empire. This leaves the settlement intact but establishes a new Skaven undercity beneath it. With four building slots, an undercity is a powerful addition to your infrastructure, but the more it is developed, the greater the risk that it will be discovered. If discovered, it will be demolished.

Province and Region Additions and Changes

Mods and Save Games

The Load button will be deactivated when a save is missing required mods. However, if you wish to override the warning like the crazy chaos worshipper you are, you can double click the save you wish to load.

When the DLC launches, the Assembly Kit will not be able to process Startpos files. However, this is something that will be fixed with a small launcher update that we are aiming to publish next week.

The DLC team have added a few new Lua commands for modding scripters on request.