This disambiguation page lists articles associated with the same title. If an internal link referred you here, you may wish to change the link to point directly to the intended article.

Dragons in Warhammer Fantasy are large, flying, reptilian monsters. They have four legs, two wings and fiery/corrosive breath. In Total War: Warhammer, dragons were introduced as large flying monster units that cause terror, and can be character mounts in some cases. In Total War: Warhammer II, new dragon units/mounts were added, and all dragons received breath attacks as active abilities in battle.

Many other things in the Total War: Warhammer series also have "Dragon" in their name. 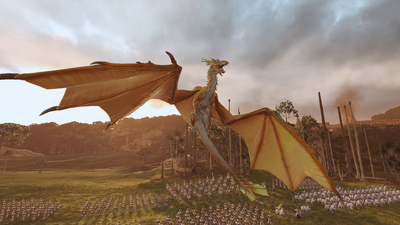 Screenshot of a Sun Dragon in battle.