The Empire is a race introduced in Total War: Warhammer. The Empire is playable in campaign, multiplayer and custom battles.

The Empire is the largest human nation in the Old World. They are a proud country built on gunpowder, steel, and faith in their patron god Sigmar. They are based on the real world Holy Roman Empire during the 16th and 17th centuries. Their army combines Spearmen, Knights and Cannons with fantasy elements such as Battle Wizards, Steam Tanks and Griffons.

In Total War: Warhammer they have no playable subfactions, but have 3 legendary lords.

From Total War: Warhammer II and onwards, they have 3 playable subfactions and 4 legendary lords. The 3 subfactions are Reikland, The Golden Order and The Huntsmarshal's Expedition.

A summary of Empire gameplay:

"By Sigmar, the Hammer and the Empire!"

For two and a half millennia The Empire has formed a bulwark against the encroaching forces of destruction. The Empire lies in the heart of the Old World, and it is the greatest and most powerful of all the nations forged by Men, greater even than the fair land of Bretonnia. But the The Empire is in constant turmoil, beset on all sides by enemies ferocious and foul, with even dark gods and their unholy followers desiring nothing more than the Empire's utter destruction.

Yet it endures, for mankind has a steely determination to not merely live, but thrive. The Empire’s armies are mighty with ranks of highly-disciplined troops and heavily-armoured Knights, led by valiant warrior-generals and supplemented by the arcane will of Battle Wizards and powerful machines of war.

While the Empire’s vast armies are constantly caught in the swirling maelstrom of war, facing all manner of threats within and without its porous borders, perhaps its greatest foe is, and always has been, itself. For the Empire is not one harmonious nation but a collective of fiercely independent provinces and city-states each led by an Elector Count – a powerful noble whose own interests often come before matters of his people or the greater good of the nation. It is from these men and women that an Emperor is elected; in the past the realm has been blighted by a succession of corrupt leaders, or been riven with internal strife as rival Electors fought for the throne. During such dark times the Empire was at its weakest and so its many enemies have taken full advantage.

And yet when mankind seems in greatest peril, the Twin-Tailed Comet arcs across the sky and a great leader comes to the fore. First it was Sigmar, the warrior-god that founded The Empire. Then two hundred years ago, Magnus the Pious marched to the aid of neighbouring Kislev, and purged the lands of Chaos, uniting the Empire under one glorious banner for the first time in centuries.

Now, a new Emperor has been crowned. He is untested, unwilling as yet to take up Sigmar’s warhammer. Furthermore, he is not the candidate many Elector Counts wanted. As a result the Counts are uneasy and in some cases outright hostile. So begins the reign of Karl Franz, and he has much to do: unite The Empire, secure its borders and bring prosperity to its beleaguered citizens. It is a time when dark clouds gather in the north, threats lurk in the Empire's dark forests; the dead walk again in Sylvania; The Empire's ancient allies are under siege, and the Greenskins are more belligerent than ever.

The Twin-Tailed Comet blazes across the sky once again, but is it an omen for good... or ill?

In battle, The Empire has access to a large and balanced unit roster with a wide range of options. Their roster offers plenty of flexibility in terms of strategy. The backbone of their armies are infantry armed with a variety of weapons from greatswords to spears and handguns. They also have various types of knights and ranged cavalry, cannons and even magical artillery. The mighty Steam Tank is one of the game's most powerful war machines. The Empire even has flying units and monsters, available as character mounts.

However, high specialization among units means that the day is won not through numbers or tactics, but a competent strategic approach through combined arms: mixing units and covering their weak spots with other forces. As they lack any sort of elite infantry, holding the line against most opponents can be extremely difficult and requires heavy reliance on the support of ranged units (outriders and handgunners) and shock cavalry (demigryph knights) for hammer and anvil tactics. The Warrior Priest hero character can also use powerful area of effect buffs that can offset their relatively weaker melee infantry. Artillery is essential for softening up approaching formations of elite tier infantry in the campaign once enemy factions gain access to it, as none of the Empire's infantry can last long against them in melee.

Colleges of Magic: Empire spell casters have access to the Lore of Metal, Lore of Light, Lore of Heavens, Lore of Fire, Lore of Beasts, Lore of Life, Lore of Shadows and added in the second game: Lore of Death. This is a total of 48 spells, the most of any faction. Each type of Empire wizard has its own unique model (and in some cases unique mounts or abilities) to represent the various Colleges in lore.

The Empire has several Regiments of Renown. These are elite, unique versions of standard Empire units.

The Empire has access to Elector Count State Troops. These are elite, unique versions of standard Empire units. You can recruit them by appointing or confederating with an Elector Count. 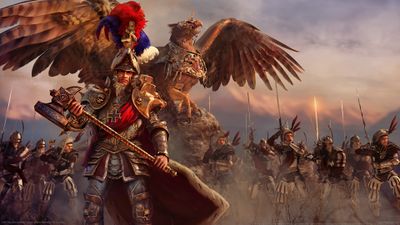 Karl Franz, with Deathclaw and Greatswords in the background.

The Empire is a normal, non-horde race who occupies settlements and controls provinces.

In Total War: Warhammer there is only one playable Empire faction which can choose from the following Lords:

In Total War: Warhammer II, Balthasar Gelt was split into a separate subfaction, the Golden Order. So the main Empire faction, Reikland, now has access to:

There are a total of four Legendary Lords for the Empire:

In campaign, as of Total War: Warhammer II, the Empire has 3 playable subfactions, each with their own starting position and led by different legendary lords. See individual pages for details and strategies.

As of the Empire Undivided patch in Total War: Warhammer II, when playing as Karl Franz or Volkmar the Grim you start off as the Elector Count of Reikland. This provides the following benefits; see the Golden Order page for details regarding them. Note that The Huntmarshal's Expedition does not have this feature.

Offices are a gameplay mechanic for The Empire in the campaign that allows them to assign characters to certain positions in the Empire government. This confers a unique title on the character, and gives various bonuses to the whole faction and to the specific character.

In the Empire Undivided Update (9/11/19) for Total War: Warhammer II this mechanic was removed for Fealty and Imperial Authority. However, it still exists in the first game as it is not affected by the second game's patches.

Empire players can extend their authority across the empire by engaging in internal politics and quelling agitators in their efforts to confederate or go to war with the Elector Counts leading other major Empire factions.

Technologies in The Empire tech tree must be unlocked by constructing the correct building before they can be researched.

Empire post-battle options for captives are as follows:

The Empire has these settlement options when they have captured a settlement:

Under the regional occupation system of Total War: Warhammer I, The Empire can only occupy Human/Vampire Counts land. They cannot occupy mountain/wasteland areas which are restricted to the Dwarfs and Greenskins. Nor can they occupy Norsca.

Victory Conditions (For Reikland and the Golden Order?)[edit | edit source]

The same as the short campaign, with the following addition:

There is the following paid DLCs which has extra content for the Empire:

On the campaign map, many minor factions are grouped together as Empire Provinces. These all have a diplomatic positive racial bias towards each other, and use units from the Empire unit roster.

Introduced in An Eye for An Eye campaign:[edit | edit source]

During a Chaos Invasion, the AI Empire factions gain the Shield of Civilization trait along with certain other races.

'Karl Franz of the Empire' trailer