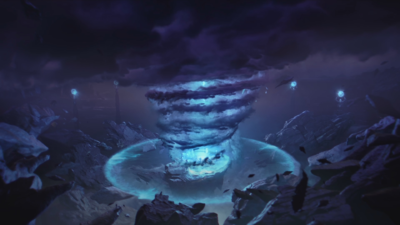 The Great Vortex is a large feature located in the very center of Ulthuan on the Isle of the Dead. Gaining control of the Vortex is the main goal of the Eye of the Vortex campaign and rituals.

The Great Vortex is a swirling tempest of magic that was created long ago by the High Elves (and secretly also the Lizardmen) to drain excess magic (raw Chaos energy) out of the world. Since the Daemons of Chaos are creatures of magic and feed on it, this keeps them from invading the mortal plane in large numbers and bringing about the end of the world.

However the Vortex is still only a stop-gap measure, since magic is still pouring into the world from the collapsed Chaos portals at the planet's poles.