Ikit Claw requires The Prophet and the Warlock to play as.

Ikit Claw is a Skaven legendary lord in Total War: Warhammer II. In the campaign, he leads the Clan Skryre faction. 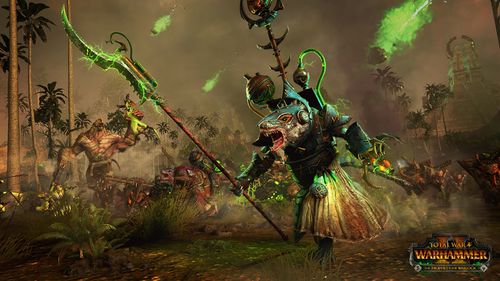 Official screenshot of Ikit in battle.

Ikit Claw – like all of Skavenkind – is naturally suspicious, untrusting, untrustworthy and treacherous. His aptitude for science and invention is unrivalled, but as well as being the greatest Skaven Warlock Engineer of all time, Ikit Claw has also developed an awesome command of the Winds of Magic. His exceptional scientific knowledge and magical powers have made him indispensable to the Council of Thirteen.

In his quest for destruction, Ikit seeks to realise his grandest design – the mighty Doomsphere – and he will stop at nothing to unleash it upon the world…

Sensing great Warpstone deposits in the jungles of Lustria, the arch Warlock-Engineer has claimed The Star Tower in the name of Clan Skryre: a staging-post from which to delve deep into the continental interior. With the Forbidden Workshop at his disposal, Ikit Claw will bend the raw stuff of chaos to his twisted designs, forging ever-more ingenious and cataclysmic weapons… and placing the Warlock-Engineer on a collision course with the Prophet of Sotek!

Before being mounted, Ikit Claw begins as a ranged infantry unit.

Objectively speaking Ikit is the most powerful Skaven Legendary Lord in campaign currently (10th July, 2020). This is due to the fact that he is the only one of the four available Lords who gets a personal mount (Doomflayer or Doomwheel) as well as his faction´s unique Forbidden Workshop mechanic. The sheer multitude of upgrades and items he can get to improve his weapon teams and war machines with is massive, not to mention he also has access to extra Regiments of Renown and the devastating Doomrocket. Since he comes with an upkeep reduction of 50% for weapon teams, his army should be focused on heavy ranged attacks and war machines.

On the battlefield Ikit himself is best used against enemy infantry, blasting them to pieces with spells from the Lore of Ruin and his Brass Orb ability while buffing your own units. His two mount options give him the mobility to be wherever you need him to be to support your frontline and the crushing mass to deliver a good charge.