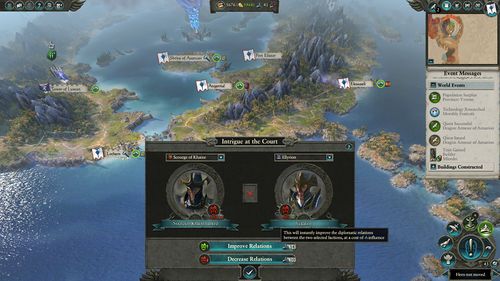 The Intrigue at the Court menu.

Intrigue at the Court is a special menu for High Elves where influence can be spent to influence diplomacy between factions.

Influence is a special resource/currency used by the High Elves factions in campaign mode, alongside money.

influence is displayed in the top center of the screen, near money. Influence cannot go into the negative.

Influence is gained in the following ways:

Influence can be spent on the following things:

Intrigue at the Court[edit | edit source]

Intrigue at the Court is a menu accessed via a button with the influence icon, in the bottom right of UI while viewing the campaign map. This menu gives the player a list of all factions they have discovered so far in this campaign. Additionally, it will show the names of the two factions' leaders, and their current status towards each other (diplomatic relations, and also whether they are at war, in an alliance etc). Players simply select two factions from the drop down menus, and then click the "increase relations" or "decrease relations" button. This will instantly increase or decrease relations between the two factions.

The amount of influence required to raise or lower diplomatic relations depends on how much those factions already like/dislike each other. For instance if two factions at -90 (strong dislike) then raising relations will cost a significant amount of influence. The reverse is also true - lower relations between two trusting friends is very costly.

Each time you increase or decrease relations between two factions, an event with a small story will appear, notifying you of how much relations increased by (typically no more than 10 - 30 either way)