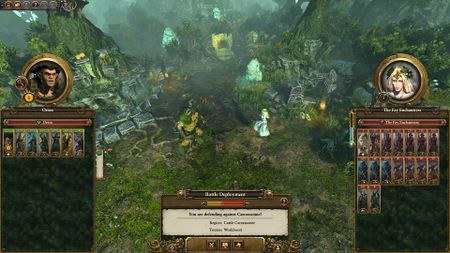 A Wood Elves army in Use Worldroots stance, being intercepted by Bretonnia.

Not to be confused with Evasion (skill), a character skill for spellcasters.

Certain stances have a chance to cause an intercept if an enemy army is nearby. If an intercept happens, then a battle will occur, similar to an ambush battle, where the intercepted army is in a bad position. The battle will be fought on an Underway, Worldroots or Beast-Paths battle map.

The opposite of intercepting is evading - where the army using the special stance is able to evade and not get intercepted.

The following stances give a chance to be intercepted by enemy armies:

If an enemy army is using those stances, then sometimes the player will be given the option to intercept them or not.