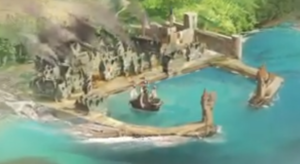 Port Reaver, one of the settlements belonging to the New World Colonies.

New World Colonies is a Southern Realms faction introduced in Total War: Warhammer II. The Colonies were previously led by Philipp Billings but he was replaced by Helmut Nussbacker in The Empire Undivided Update. The faction resides over a small part of the northeastern shores of Lustria.

Swamp Town and Port Reaver are the two cities the Colonies control at the start of the game.

Despite the brothels and taverns making up its decadent core, Swamp Town is no place for excess. With a name the inhabitants had shown surprising honesty with, Swamp Town is malarial and grubby. Its crudely built huts and hovels are riddled with termites and slimed with mould; even the newest of them stink of decay as they rot slowly back into the ground from which they had sprung. They stink further as they decompose, each of them filled with the rank odour of rotten vegetation and other, more revolting things. But if the air indoors is dank, the air outside is even worse. After what a voyager had experienced crossing the ocean, and the clean air of sea breezes, the humidity here is choking, an asthmatic fog that drones with the constant hum of countless biting flies. After just two hours ashore, those without tough, leathery skin find themselves covered with an agonizing itch of bites and incisions.

Past the rickety bamboo pier, even the streets ooze. Mud and shit suck hungrily at one's feet with every cloying step, insinuating itself into the damp leather of boots and spilling over the cuffs.[1]