Norsca is a playable race introduced in Total War: Warhammer.

Norsca is playable in campaign, custom battles and multiplayer.

The land of Norsca is an icy mountainous peninsula in the far north, under the shadow of Chaos. Its inhabitants (the hardy and warlike Norscan Tribes) are Chaos-worshippers, and they share their inhospitable land with ferocious monsters. When the Norscans raid and plunder other lands, it is with hordes of barbarian warriors backed up by trolls, mammoths, fimir, skin-wolves and even mighty frost-drakes.

A summary of Norsca gameplay:

Cheaper, undisciplined marauder infantry and cavalry units, backed up by many large monstrous units. Few ranged options, though Marauder Hunters (Javelins) are quite good against monstrous units. Mammoth units are a great asset, and have the siege attacker trait. No less than 7 monstrous infantry units including characters.

Norsca have several Regiments of Renown available. These are elite, unique versions of standard Norscan units.

Two Regiments of Renown are rewards for Monster Hunts (see below), while one is a reward for gaining max allegiance with the Hound (again, see below).

The other six were added in the Foundation Update. 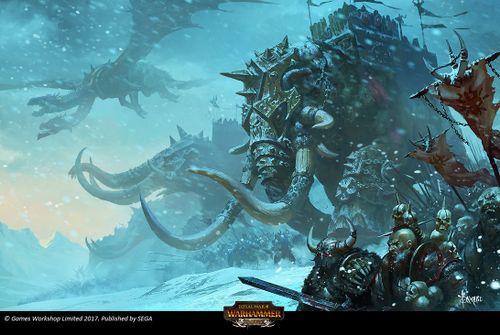 Norsca is a non-horde faction who occupy settlements and control provinces, however they use a special colonization system different to other races. See below.

Norsca players can choose from the following lords when starting a campaign. See the individual lord pages for information on their various bonuses in campaign.

Norsca as a race uses a different settlement system to other races, and is unaffected by regional occupation. They can only occupy settlements in the Norscan peninsula, coastal settlements, and racial capitals.

If you defeat Throgg or Wulfrik then you will get Throgg Defeated or Wulfrik Defeated. These latter dilemmas only give the option to confederate or release the lord (which gives -20 relations with their faction).

The Everchosen's Summons is a special dilemma for World Walkers and Wintertooth that occurs when the Chaos Invasion starts. It allows them to either ally with Archaon and his Warriors of Chaos in their invasion, or forge your own route and destroy the Warriors of Chaos.

Climate preferences for Norsca (note they are still affected by the Norsca settlements restrictions):

Norscan post-battle options for captives are as follows:

Norsca does not have any commandments, since they cannot control entire provinces except in the Norscan peninsula itself.

On the campaign map, many minor factions are grouped together as Norscan Tribes.

Factions that appear for the Chaos Invasion:

Factions that appear if awakened by Warriors of Chaos:

Factions that can appear to interfere with Rituals: