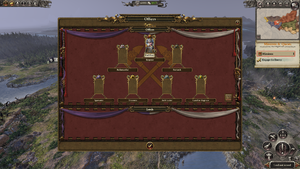 Offices are a gameplay mechanic for The Empire in the campaign in Total War: Warhammer.

This feature was removed from Total War: Warhammer II in The Empire Undivided Update and replaced with Imperial Forts and an expanded Elector Counts system.

Offices in the Imperial cabinet are six position of power that allow an Empire player to further tweak and specialize their lords and heroes. Each has a different effect on the local province and army, with a few having a global, empire-wide effect. In general, it's recommended to staff these sooner, rather than later.