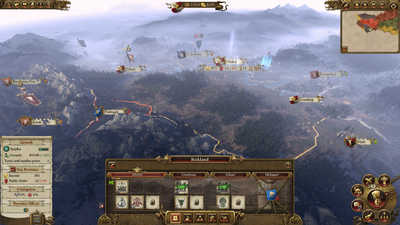 The Reikland province and its settlements in Total War: Warhammer.

Settlements are towns, cities or fortresses on the campaign map. Most factions are focused around fighting to control and manage settlements. Horde factions do not control settlements.

Each province on the campaign map has a capital settlement, and usually also from 1-3 minor settlements (a few provinces have only 1 settlement). Owning a settlement means you own the local region around it and have vision of the area. It also lets you tax the people for money. Owning all settlements in a province grants you control of that province, and controlling an entire province allows you to issue a commandment. In the screenshot to the right, notice how the player controls 3 settlements in a province, while the last one is controlled by an enemy faction.

Different kinds of settlements have different amounts of building slots, which changes depending on campaign and faction. See the building slots article for more detailed info.

Which settlements can be controlled by which races?[edit | edit source]

An enemy army may attack a settlement in an effort to capture it. On the campaign map, settlements have a zone of control which prevents enemy armies from going too close without attacking.

Winning the battle for a settlement brings up the settlement options such as occupy, sack, raze etc.

Most provinces have a capital settlement and from 1-3 minor settlements.

Some settlements will be marked as a strategic location for their chosen race - players should make conquering these a priority. This is usually because a landmark can be constructed there.

Fortress Gates were introduced in Total War: Warhammer II, they are a special type of settlement found in Ulthuan.

The Black Pyramid of Nagash (located in Great Mortis Delta) and the Oak of Ages (located in Yn Edri Eternos) can be considered special unique settlements which are important for the campaign objectives of Tomb Kings and Wood Elves respectively.

Elven Colonies were introduced in Total War: Warhammer II, they have a special settlement building chain and some special bonuses for elf factions, but are otherwise normal.