The Skaven are a race introduced in Total War: Warhammer II. They have six playable factions, each led by a different legendary lord.

Most skaven are male. The few females are bloated, drugged, barely conscious creatures which are jealously guarded by clans and forced to birth hordes of young. As a result the ratmen are perhaps the most numerous intelligent race in the world, even outstripping the Greenskins. Because of this, food is a constant concern for them. Apart from food, the Skaven also crave warpstone – they are one the few races reckless enough to work with this dangerous Chaos-tainted substance. The lowest rung of Skaven society are slaves, who also double as food when times are tough. These are mostly Skaven, though there are also slaves of other races.

Skaven society is divided into Clans which rule over slaves and compete for power and influence. Clan Eshin are highly secretive masters of stealth and their Assassins are feared in the Under-Empire and beyond. Clan Rictus are warriors producing the elite Stormvermin. Clan Skryre are engineers, combining magic and technology to create devastating weapons and war-machines. Clan Pestilens are a cult of religious fanatics who worship the Horned Rat in his aspect as the bringer of plague and disease. Clan Moulder hail from Hell Pit, and create horrifying mutated monsters. Aside from these, there are several "Warlord Clans" such as Clan Mors.

The Skaven worship the Great Horned Rat, a malevolent deity who embodies all the treachery, destruction, disease and malintent of the Skaven. The Horned Rat is served by the Grey Seers, a priesthood of white-furred, horned rats with great spellcasting powers. This caste of sorcerer-priests stands apart from and above the clans. Above the slaves, clans and seers are the Council of Thirteen, the shadowy governing body of Skaven society. This council contains representatives from all the major clans, as well as the leader of the Grey Seers. The thirteenth seat on the council is traditionally reserved for the Horned Rat himself. 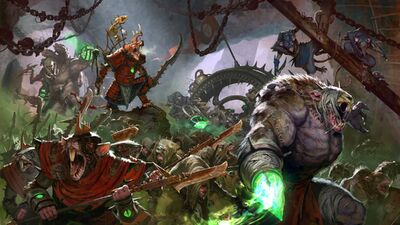 In the Eye of the Vortex campaign, the Skaven compete to control the Great Vortex by using Rituals. Exceptions are Clan Eshin and Clan Moulder who have different goals.

The Pestilent Scheme Priest can spread plague to an enemy city, reducing growth (-30) and income generation (-50%) for 6 turns. It costs the enemy significantly more income than it costs itself, if applied to a suitable money making city (gold mine, etc.). The cooldown on the rite is short enough to continually apply the effect to an enemies economic center. On higher difficulties it is not very effective, because the AI gains significant bonuses.

Skaven have access to 4 rites, which provide various bonuses. These are the only way they can recruit the DOOOOM! Engineer and Pestilent Scheme Priest who can spread