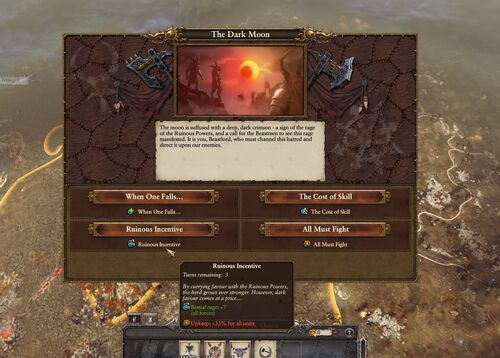 One version of the dilemma.

The Dark Moon is a special recurring dilemma for the Beastmen. It represents the magical Chaos moon Morrslieb becoming full in the sky. It occurs every 7 turns in the campaign. It always has four choices, however which ones appear seems to be random.

The status of the event, and how many turns until the next full moon, can be seen in the top center of the screen whilst viewing the campaign map.

The text changes from event to event:

The herd can replace their fallen with alacrity, yet the newcomers are reluctant to fight.

The herd moves, going where you tell them until their legs give out from exertion.

The herd swells and grows, endlessly it seems. In a herd of such size each beast demands much recompense.

Gors of all strengths and ages are welcome here. All have their place, even those whose fighting strength is less... developed.

By currying favour with the Ruinous Powers, the herd grows ever stronger. However dark power comes at a price...

The herd is incensed and ready for war! Provided, that is, the war comes to them.

In the darkest forests dwell the mightiest grizzled beasts. They only fight for a Beastlord who enjoys the darkest favour...