The Huntsmarshal's Expedition requires The Hunter and the Beast paid DLC to play as.

The Huntsmarshal's Expedition is a playable faction of The Empire introduced in Total War: Warhammer II. It is led by Markus Wulfhart and can be found on the northern coast of Lustria, surrounded by Savage Orc Tribes, Lizardmen, Skaven and the Vampire Coast.

For two and a half millennia, the Empire has formed a bulwark against the encroaching forces of Destruction. Lying at the heart of the Old World, it is the greatest and most powerful of all the nations forged by men. Yet across its lands, evil always lurks in its shadiest corners and darkest depths. Mutant monsters prowl its dark forests, malevolent ratmen plot beneath its cities, and the living dead rise from its graveyards. Monstrous enemies gaze belligerently across its borders, with the threat of invasion from any number of murderous abominations an ever-present danger.

Yet it endures, for mankind has a steely determination not merely to live, but to thrive. Ever since the legendary warrior Sigmar first united the primitive man-tribes against their common enemies, the longevity of the Empire has been assured by great men hailing across its provinces.

Out of the forests of Middenland emerged Markus Wulfhart, who rose to prominence to become the finest scout in all the Empire. Once a lowly huntsman, his life was irrevocably shattered when a one-eyed Bonegrinder Giant razed his hometown of Drakenburg to the ground, slaughtering its inhabitants. Burning with the desire for revenge, the young hunter tracked the monster to its lair and skillfully blinded it with a single shot from his bow, before severing its rope-like hamstrings with his blade. Closing in on the crippled giant, he hacked at its neck repeatedly with manic determination and decapitated it.

Markus had slain the beast that had murdered his kin, but in suffering the tragedy of losing his entire village he had been set on a new, death-strewn path. He swore that as long as he still lived, no other settlement would suffer the fate of Drakenburg, and he set out to hunt the various monsters that preyed on the Empire. Only when every last one of them was slain would he rest. In recognition of his deeds, Markus was offered a knighthood and a nobleman's estate by Karl Franz himself. Wulfhart declined, wishing only to be allowed to continue with his self-imposed quest. Impressed with his grim fortitude, the Emperor bestowed unto Markus the title of Huntsmarshal - the Emperor's Captain of Scouts.

Answering only to the Emperor himself, Markus leads an elite, hand-picked regiment of scouts and hunters from across the land - a disparate group in which city-born men rub shoulders with those raised in rural backwaters. One thing is certain, however - Wulfhart's hunters are the most accomplished group of monster slayers in the Empire.

The Huntsmarshal's Expedition has some unique campaign mechanics, unavailable to any other Empire faction.

Eye of the Vortex Introduction

Markus Wulfhart has dutifully answered the Emperor's call. The Empire's Lustrian settlements have recently fallen victim to a series of savage raids from an elusive attacker. The men of the colonies have long known about the strange, upright-walking reptiles that dominate the continent, but the monstrous 'spirit' they claim is now tormenting them and threatens to bring about an end to Imperial expansion in the New World. Fortunately, the Huntsmarshal specializes in tracking the untrackable - the hunt is on!

Far from the heart of civilisation, the Empire are in a race; the prize? The untold riches of Lustria. After a spate of recent attacks against the colonists in the New World, Karl Franz has called upon his Captain of Scouts, Markus Wulfhart, to defend the Empire's holdings and reaffirm their foothold on this beast-infested continent. From his newly-established base camp on the Scorpion Coast, the hunstmarshal readies his expedition for their imminent incursion into the jungle. 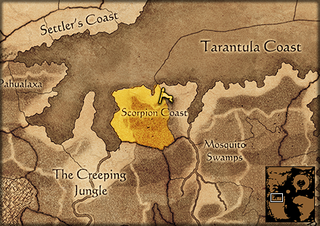 Eye of the Vortex start position 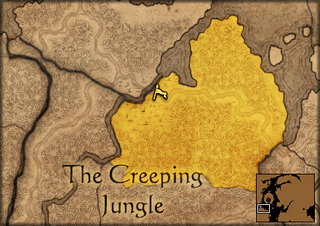 Sent to the shores of Lustria by Imperial Mandate, Markus Wulfhart intends to protect the New World Colonies from their Lustrian predators with only limited supplies and troop numbers, as further reinforcements will not arrive from the Old World for quite some time.

However, increasing the expeditions

The lands beyond the Empire are are a hostile place - your actions there will not go unnoticed by the natives. Winning offensive battles and harassing local inhabitants will increase their Hostility towards you, but also improve your standing with the Emperor and increase the rate at which

Imperial Supplies reach the expedition. Cross the locals too much, though, and face their wrath!

Scattered across the world are some of the finest

hunters to ever have lived; track them down and secure their services to complete to complete the expedition's goals whilst developing each hunter's unique attributes and learning of their past glories and tragedies.

"Wulfhart's Hunters", as they call themselves, are an elite rag-tag group of trappers, hunters, archers and scouts drawn from all over the Empire. Nowhere else in the Emperor's armies can a more diverse group of warriors be found in one unit.

Such grim men come from as far south as Wissenland, or as far north as Middenland. City-born men of metropolises like Nuln or Altdorf rub shoulders with their comrades of more rural birth from the agricultural lands of Averland or Stirland.

These brave men fight side-by-side under the charismatic leadership of Markus Wulfhart, and any regional differences are snuffed out instantly under his command. An eternal bond of brotherhood is forged as they fight against a common foe.

Under the masterful leadership of Markus, Wulfhart's Hunters have earned the respect of their countrymen by being the most accomplished group of monster slayers in the Empire, and some say the entire Old World. Such hunts include the killing of the Talonbeast of Stirland, the Ostermark Ice Dragon, and even the Chimera of Flamespire Peak, to name just a few.

Whilst lesser men would run horrified by the monsters the world harbours in its dark corners, Wulfhart's Hunters stand their ground against such impossible odds, as both Markus and his men calmly steady their bows and aim for the killing strike. 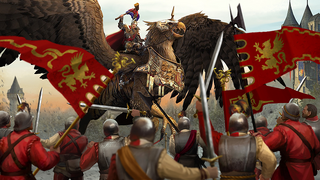 Same as the short campaign victory but with the following additions:

When controlled by the AI, The Huntsmarshal's Expedition will have the following diplomatic traits:

The Huntsmarshal's Expedition will start with the following treaties already in effect: