From Total War: WARHAMMER Wiki
(Redirected from The Menace Below)
Jump to: navigation, search 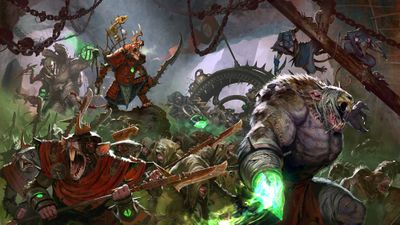 Most units within the Skaven roster have access to the Strength in Numbers and Scurry Away! abilities. Strength in Numbers provides Skaven units with benefits to melee defence and leadership but reduce movement speed (-12%) while the unit is at 50% base health or higher. Scurry Away! gives a buff to movement speed (+12%) while the units leadership is low. This causes Skaven units to essentially trade melee combat effectiveness for movement speed as a battle progresses. As a result units that have routed and regrouped still have utility as fast flanking/harassment units.

Loyalty affects whether Skaven lords are likely to rebel against you in campaign mode. Many things can affect loyalty, for instance Queek Headtaker has an increased likelyhood of having Grey Seers rebel against him. This mechanic is shared with the Dark Elves. Loyalty can be increased through victories, completed quests, recruiting more units and loyalty dilemmas. Loyalty can decrease from defeats, failed quests, disbanding units, loyalty dilemmas and randomly on its own.