Tiktaq'to is a Lizardmen Legendary Lord introduced in Total War: Warhammer II as a free DLC with the Doomsayers Update. They can be downloaded free from Steam here.

In the campaign, he leads the Tlaqua faction.

Tiktaq'to, also known as the Eye in the Heavens is the current Master of Skies of the Temple-City of Hexoatl, and is considered by all to be the greatest of the Terradon Riders. He is a master of strategy and directs the many Terradon patrols in their constant vigils, intercepting intruders, outflanking and destroying forces many times their own size, as he directs his forces from far above, with a view otherwise afforded only to the gods.

When it comes to aerial combat and leading bold hit-and-run attacks, the Skink known as Tiktaq'to has no peers. Atop his particularly fierce Terradon, Zwup, Tiktaq'to leads his squadron of flying reptiles on reckless paths through dense vegetation or steep-sided valleys so narrow that the Terradons touch the edges with each flap of their mighty wings. This and more has Tiktaq'to dared in order to surprise an enemy, strike a vulnerable flank or isolate the perfect target for the rock-dropping attack run of his bloodthirsty formation of Terradon Riders. For his countless acts of fearless flying and his savage attacks on the Lizardmen’s foes, Tiktaq’to has been named Master of Skies for Hexoatl. To be named Master of Skies is a pre-eminent position amongst Skink Chiefs, answerable only to the Skink Priests and Slann Mage-Priests themselves. In Hexoatl, it is tradition to gift this highest rank with wonders from the treasuries — the scintillatingly bright Mask of Heavens, an heirloom from an elder age triple blessed by the Skink Priests, and the fearsome Blade of Ancient Skies, a formidable weapon bristling with jagged-edged tips.

Due to his role, Tiktaq'to spends long periods of time outside of the Temple-City on patrols. There are a number of Terradon aeries set throughout the jungles where the patrols can land — within half-deserted ruins, amidst the floating islands that are tethered to the clouds by mystic chains, or any of the forts that are carved into the tallest of the jungle trees. With his sharp eyes, no patrol leader has picked out as many intruders or spotted as many rampaging beasts as Tiktaq'to.

The cagey Skink Chief also has a keen sense of when to strike and has been known to lead his patrol to victory against forces many times the size of his own — such as when he broke the Blue Viper Savage Orc tribe by having his Terradon snatch up the greenskin Warboss. The Orcs below howled with rage to see their commander lifted thousands of feet into the air only to be let go. The unfortunate greenskin's high-pitched screaming and indignant death utterly broke the tribe's will to fight and they scattered before the Terradons above. Perhaps most famously, Tiktaq'to led the vital delaying action against the hordes of Vashnaar the Tormentor. Many foes attempt to shoot Tiktaq'to and his flight of Terradon Riders out of the air as soon as they come within range. This is easier said than done, however, as the Master of Skies leads his formation in such breath-taking aerial manoeuvres that they dodge through clouds of arrows, emerging unscathed to deliver their own lethal attacks. 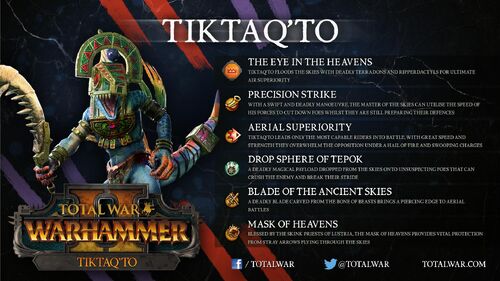 When chosen as lord:

Extra starting units in Eye of the Vortex and Mortal Empires:

Try to use him to chase Missile units and don't forget to use his rock ability which can kill many enemies once they engage your units. Watch out though - he is a competent fighter, but not an amazing one. Use his speed and mobility to pick off isolated units and reposition before a fight gets too intense. Tiktaq'To might struggle against melee units if you keep him in a fight for longer time than it's advised to. He can time his abilities like deadly onslaught and master of the skies to give him a defensive or offensive edge in a duel, but only for a period of time