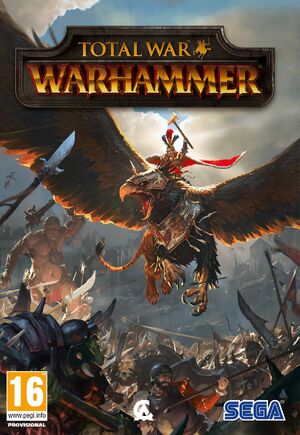 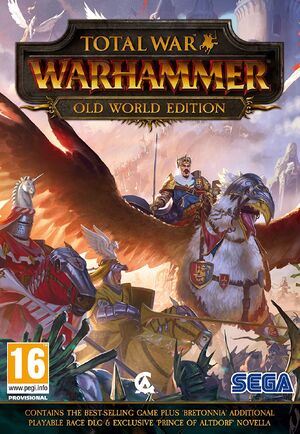 Total War: Warhammer is a turn-based/real-time strategy video game developed by Creative Assembly and published by SEGA, based in Games Workshop's Warhammer Fantasy universe. Total War: Warhammer brought the Total War series to a fantasy setting, mixing normal troops with magic, monsters and an expanded character system. The game features a campaign mode called The Old World, and on release there was four playable races: The Empire, Dwarfs, Greenskins and Vampire Counts. Another free playable race, Bretonnia, was added later.

The game was later re-released as the Old World Edition and Dark Gods Edition. See below for details.

A sequel called Total War: Warhammer II was released in September 2017. A third game is also planned for the series.

A lot of free and paid content was released for the game. See DLC for a full list.

The very first Total War game to feature a fantasy setting. In The Old World campaign, Total War brings to bear a gigantic sand-box map. Crafted from a twisted magical landscape and populated with an incredible array of awesome and deadly creatures, this is your chance to experience fantasy strategy on a scale as yet unimagined.

The battlefields of Total War: WARHAMMER echo to the swoop and roar of dragons, the bellowing of giants and the thundering hooves of monstrous cavalry. Towering beasts of both earthly and supernatural origin wade into the melee of battle, bringing death to hundreds of lesser creatures at a time.

Smite your enemies with magical storms, melt their armour, sap their fighting spirit or bolster your own forces with devastating spells that split the sky and consume the battlefield. Rally wizards, shamans and necromancers to your armies and bend titanic and unpredictable energies to your whim.

Harass your enemies with Dwarfen Gyrocopters, plunge into their front-lines with terrifying Wyverns and achieve air superiority with a stunning array of flying units for the first time in a Total War game. Entirely new tactical possibilities present themselves as you deploy your winged minions in open battles and jaw-dropping sieges. What is more, this title will go on to combine with two future sequels and additional content packs to create the largest Total War experience ever. An epic trilogy of titles that will redefine fantasy strategy gaming. 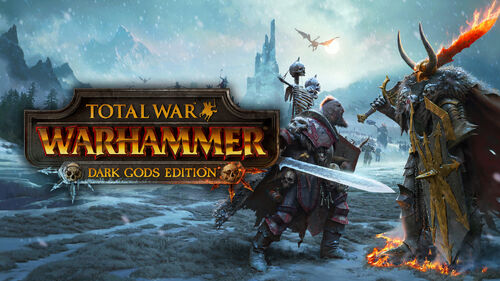 For information on gameplay, see the main page of this wiki.

Before the game was released, it was possible to preorder special editions of the game which cost extra. The Limited Edition had a metal case and an inside guidebook. The High King Edition was modelled on the Great Book of Grudges and came with a number of extras such as a map and Dwarf drinking horn. These versions are now hard to find.[1]

In February 2017, after Bretonnia was added, the game was re-released in retail stores as the Old World Edition, which also included a digital novella "Prince of Altdorf".[2][3]

In September 2018 the Dark Gods Edition was announced. This was a limited-run physical release of the game, which included the Chaos Warriors Race Pack and Norsca (DLC). This version also included a free ebook called Lord of Chaos[4]

In August 2020 this edition was announced. This was a limited-run physical release of the game, which included the Call of the Beastmen and Chaos Warriors Race Pack DLCs. The Savage Edition features brand new box art by Jose Cabrera Peña.[5]