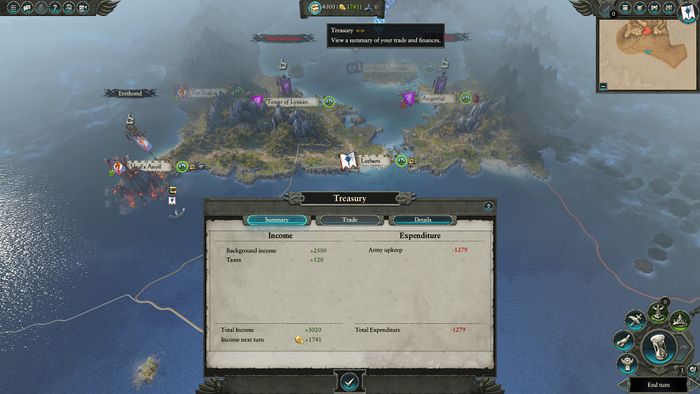 The money panel at the start of a High Elves (Lothern) campaign. Click the image to expand.

Money is the basic strategic resource of the campaign. Factions get income per turn, as well as a total treasury of saved money. Money is spent on maintaining and recruiting units, constructing buildings and more.

Money is called Favour for Warriors of Chaos/Beastmen and Dark Magic for Vampire Counts, but is essentially the same.

See our guide to maximizing money.

Background income is the base amount of income you get, even without anything else generating money for you. Background income changes depending on the difficulty level chosen at the start of the campaign.

Trade agreements can be made with friendly factions, which provides income depending on the resources each faction has.

Upkeep is the cost of maintaining lords, heroes and armies of units. Upkeep is the main factor which reduces your income, though there are others.

treasury is your store of money. This is where you draw money from to pay for buildings and recruit new units. If your treasury reaches 0, then you are bankrupt.

After a victorious battle, players get loot (sometimes called post-battle loot), which is a lump sum of money to your treasury. For some factions, this is their main form of getting money. Some post-battle options increase loot, as do some traits, abilities, items etc.

After conquering an enemy settlement, one of the available options is usually to sack it. This adds a lump sum to your treasury.

A faction will feel the effects of bankruptcy should it's treasury run out of money.

Public_order will suffer greatly, and unpaid troops will desert their armies. This status will continue until a positive cash balance is restored - preferably permanently.