Rites should not be confused with rituals for the Eye of the Vortex. 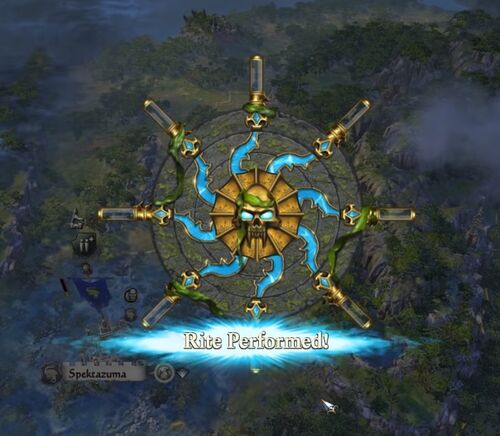 These are the rites available to Vampire Coast factions in the campaign mode of Total War: Warhammer II.

Stories speak of rivals, cursed to watch as this pirate's treasures grow large and theirs diminish.
Such is the way of the sea, where larceny and death are the primary activities.

Legend has it that Harkon himself captured the Hell-Hammer which provided this brutal piece of artillery.
They say Bess is cursed, but more rightly, those caught in her crosshairs are the cursed ones.

It is said that when the dead come from the sea to stalk the land, they are shrouded in a fell mist,
a thick evil fog which gathers around the admiral commanding them.

Tales of crews who have served under undead pirate captains state that they were press-ganged to remain
under the sway of their admiral, not just for decades but forever. It is best, then, to embrace such fortune, for fate is rarely kind to deserters.